- November 17, 2017
I've said the following so often, "in what looked like perfect conditions..." well this morning was no exception, but no one told the birds! Which is typical when you have a visitor, sorry Julie.

Still Morfa Berwig looked great at 06:00 this morning as I sloshed my way through flooded ringing rides carrying all the kit laden like a donkey... no comments or thoughts please.

A very modest session but always worth it especially when one of the two Redwings was a monster of a bird, well it was certainly different, I knew that because my helper originally identified it as a Blackbird - sorry couldn't resist.

Based on the comments from Mr Svensson the Redwing with its much buffier face, and breast/ sides and darker mantle and wing of 124mm placed it as a likely candidate for the Icelandic race corbuni, it only weighed in at 61.6gms and no fat.
The second Redwing was much more the "norm"  iliacus, a paler bird with whiter, face, breast and sides with a wing of 119mm but a weight of 72.2 and a fat score of 2.

The photographs below, despite the light, hopefully show the obvious plumage differences.


A Cettis Warbler was "controlled", the ring was not easily read, took ten minutes plus some "macro" photos to read it properly, I'm guessing its one of Heathers birds from WWT Llanelli.
The ringing data will be duly submitted to the BTO,
[however local enquiries have established the bird was ringed on 16th October 2017 at OXWICH MARSH, as a bird hatched in 2017 (age code 3)]
A movement 12.3km NNE 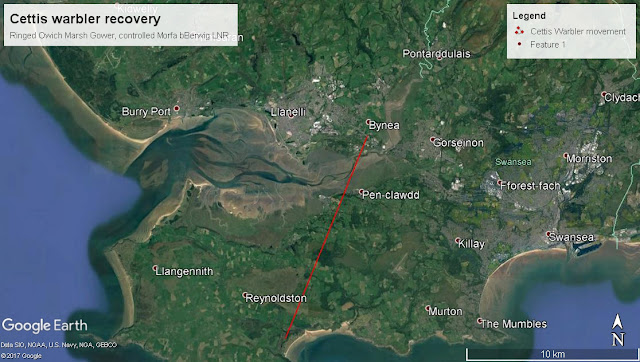 One of the Blackbirds, a female was on the chubby side with a wing of 129mm and a weight of 117gms and a very heavily scalloped breast of grey feathers, - continental type? - no I didn't take a photo!

Popular posts from this blog

Carmarthenshire - Did you Know? 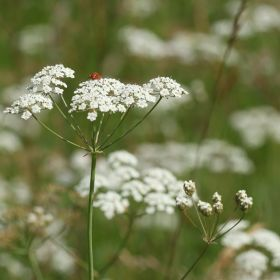 Well its ages since I've found time to write a blog post apologies for that but here we go with some interesting facts and personal thoughts about Carmarthenshire wildlife, and a bit further afield. Did you know: That we have a County plant, Whorled Caraway, Carum verticullatum ; found in typical Rhos pasture a feature of the Carmarthenshire landscape though often under threat from changes in agricultural practices Did you Know: That there are 311 species of birds recorded as being seen in the county, a respectable figure by an measure, amongst the rarities are Blue-winged Teal, a species from North America, Black Stork an European species which itself has a limited range. Having a decent stretch of well watched coastline the county is well placed for observers to document the seasonal arrival and departures of migrating birds such as Northern Wheatear, Swift, Willow Warbler, the Carmarthenshire Bird Club is a very welcoming bunch of like minded individuals and its well worth joi
Read more 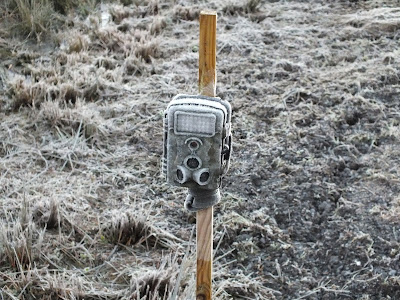 Quite a decent frost this morning, saw me at the Morfa Berwig reserve to retrieve the trail camera which I set yesterday evening...... Two very regular visitors to the reserve reported seeing an OTTER in the Afon Goch, we know Otters visit the reserve but to have a sighting is great. I have been talking about putting the camera out as there have been signs of Otters for a few weeks with the information received it seemed like a good idea. Disappointedly there were no otters caught on camera, in fact nothing stirred during the night to set the camera off, this morning I had to break the ice from the post the camera was on to get it out of the river which was frozen with a decent layer of ice. So all I've got are the sounds of the birds flying over! Ignore the time, it was actually 15:35 Frosty Camera! As I was leaving the reserve I stopped to make a phone call and noticed the lightening blue of a KINGFISHER perched over one of the ditches, I took a record
Read more 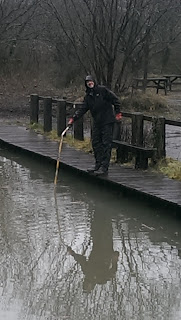 It's Wednesday, regular readers know that means it's volunteer day. Today we journeyed to the NE corner of the county to the Ynys Dawela Nature Park. In typical December weather of light rain and mist we tackled a few jobs, including removing some fencing - seems we always remove fences- the usual litter pick and a   Knotweed survey ready for dealing with in 2018, there was very little Knotweed found. Just how deep is this pond? It is a wonderful location and the recent management work on the dipping pond, the "meadows" and areas of woodland will enhance the respective habitats for the Marsh Fritillary and allow light to the woodland floor to enrich the flora. Mown meadow There were good sized mixed flocks of birds moving through the woods with TREECREEPER, NUTHATCH, BLUE, GREAT AND LONG-TAILED TITS, a few JAYS moving through and the ubiquitous GREY SQUIRREL. The photo doesn't do the actual scene justice, ..all was calm and still.....
Read more